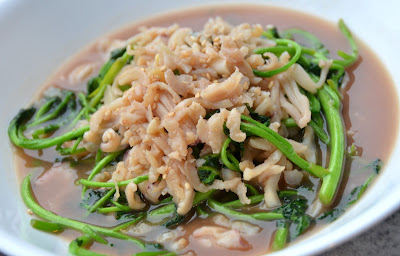 Here is a dish that turns the undesirable parts into a tasty meal!  Most people would discard these squid and scallop parts but I used them for cooking.  I spent many hours jigging for squid last summer and I was not about to waste what I caught.  I saved all of the squid fins in the freezer after I cleaned them.  Recently I purchased 2 coolers full of large sea scallops and saved the tough muscles after I shucked them.  Today I had some watercress left in my refrigerator and decided to make use of the miscellaneous parts.  I sliced the squid fins and the tough muscles across the grain making them edible and less tough.  The result was delicious!

1) Heat oil in a small pan over high heat.  Once the pan is hot add garlic and saute for 1 minute or until lightly golden.
2) Stir in squid fins and scallop muscles, saute for 1 minute.
3) Add watercress, oyster sauce, and sugar. Stir until the watercress is wilted.
4) Sprinkle the sesame seeds on top and serve with rice.

Email ThisBlogThis!Share to TwitterShare to FacebookShare to Pinterest
Labels: Seafood, Side Dishes: Other, Vegetables