Vegetarian Stew (enough to serve about 10!!) 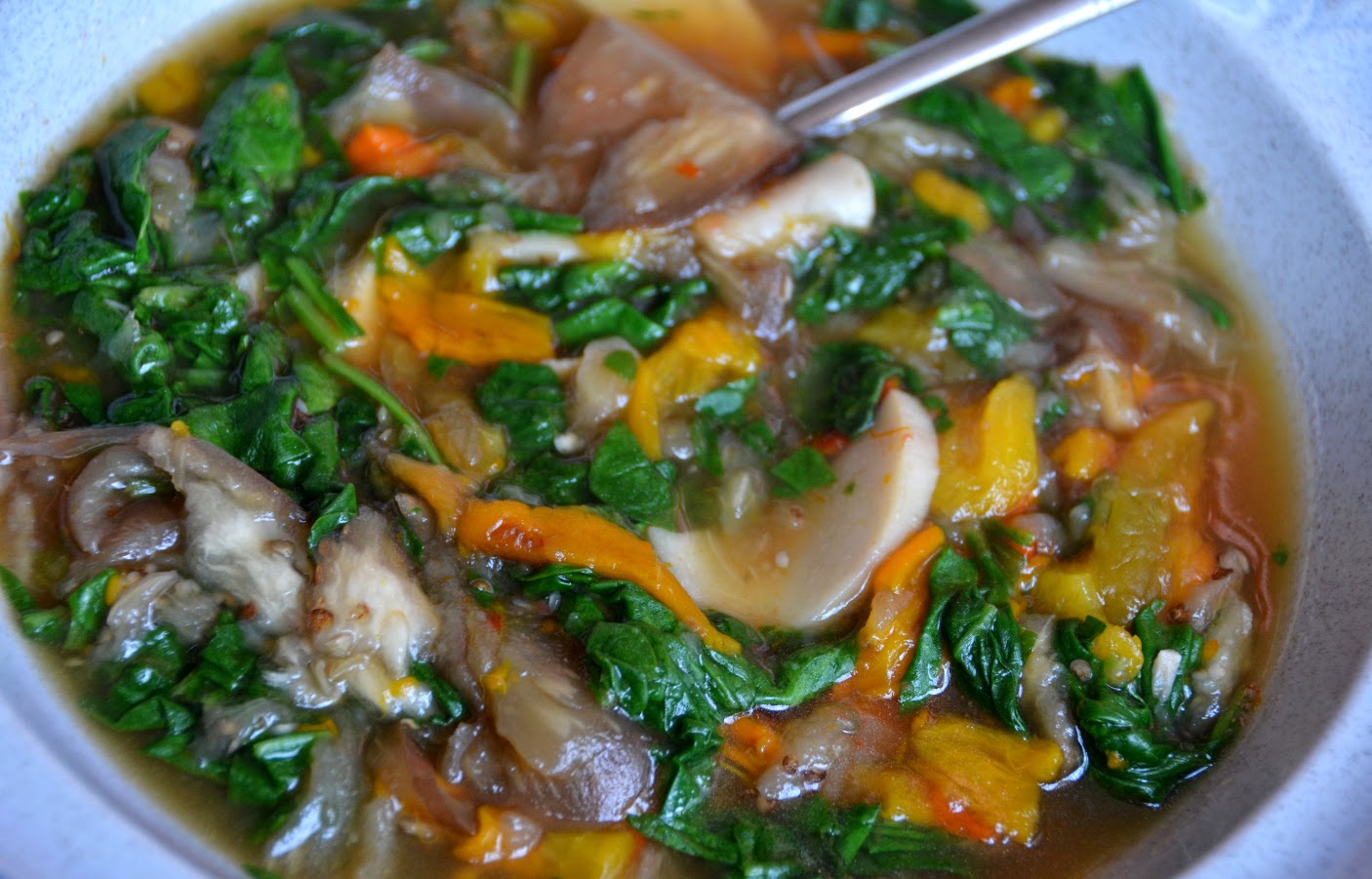 I have different vegetables including home-made roasted peppers and home-made tomato broth in my kitchen. I had no idea what to do with these items.  Sometimes I just have no inspiration on what to cook or eat.  I admit as I was cutting up the vegetables I still had no idea what I was going to do with them.  As I was boiling the sliced mushrooms and Asian eggplants in water and was feeling very lazy and unmotivated I decided to make a large pot of vegetarian stew.   So...here it is!

1) In a large pot add eggplant, mushrooms and water over medium high heat.  Partially cover the pot.  Once the liquid starts to boil, turn heat down a little to a gentle boil, cook about 10 minutes.
2) Add roasted peppers, tomato broth, onion, and salt.  Let cook for another 19 minutes.
3) Add spinach, stir the pot a few times and let cook for another minute.

*For the tomato broth I basically chopped 6 de-seeded tomatoes and 1 onion, added 2 cups of water and boiled it down for 1/2 hour.  I cooled the contents down and then put it through a ricer.
*I had a bag of mini sweet peppers and was going to stuff them.  However, I got busy and as they sat in my refrigerator they were starting to look rather sad, a bit wrinkly with even a few mild dark spots.  I decided to roast them.  The roasting time is less since they were so small.  However, because of their small size they were a pain to remove the skin and seeds--just very time consuming.  If you are roasting peppers for the first time I highly recommend you roast bell peppers, the larger the better!  Although having gone through the process of roasting these tiny (size of my thumb) peppers I must say I would be happy to roast bell peppers (size of my fist) any day!
*The Asian eggplants are the ones that are slender, long and lavender in color.  When these are cooked the skin turns brown.
*I had other plans for the spinach so I blanched them and then rinsed them in cold water.  However, while making this stew I wanted to add something green so I used them.  You can add the spinach as you are reheating the stew to serve.  This way the green will stay bright and pretty each time you eat.
*I added shredded chicken and grated cheese to the soup for something different.  I think this is a good stew to make the next time I have vegetarians and non-vegetarians at my dinner table!
Posted by Thanh at Thursday, April 17, 2014