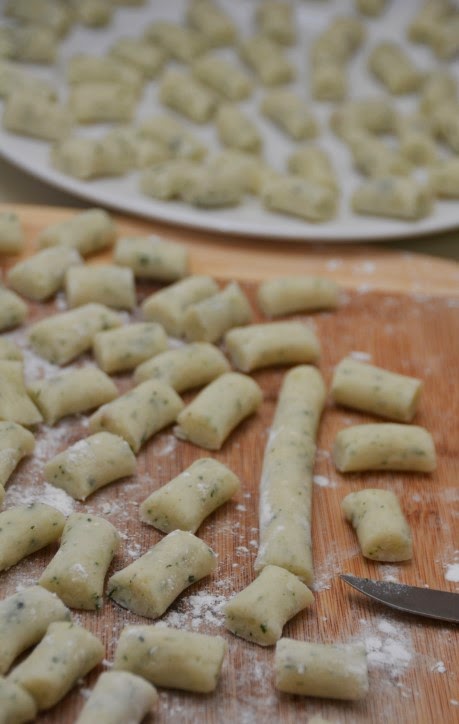 Here is my home-made and hand-made herb gnocchi. I have not made these potato dumplings for a long time. The whole day was foggy and rainy in this part of New Hampshire and I felt a bit lazy because of the weather. However, by evening I perked up a bit and decided it was time to make these tasty morsels. I did not want to wait until the riced potatoes* are chilled in the refrigerator. In the past I had to chill them in order to get the gnocchi to form successfully. This time I added more flour to my riced potatoes and that was the only way for me to get them to bind. If I use less flour the gnocchi pieces will basically fall apart in the boiling water. I experimented initially with 1/4 cup of flour and increased by 1/4 cup increment (to 1/2 cup and finally to 3/4 cup). After adding 3/4 cup flour to the riced potatoes the dough started to hold together, and I was able to roll a piece of dough into a long rope quite easily. For me I find that once I can roll the dough to the desired shape then I know I have a good working dough. Also when I drop the cut pieces into boiling water they keep their shapes making me a very happy woman!

Some months back I had leftover curly leaf parsley. Instead of letting them spoil from not coming up with any brilliant recipes I dried them for later use. I chopped the leaves and spread them on a cookie sheet. It took only a few days to get them completely dried (at room temperature) in my kitchen. I stored them in an air tight container and I was surprised by the intense green even when dried. I decided to crumble the dried parsley leaves into my gnocchi giving them the pretty emerald specks. There is not much of a taste to comment about but the gnocchi certainly look attractive!

2 lbs russet potatoes, washed well, keep whole, do not peel or cut them
3/4 cup all-purpose flour, plus a few spoonful to help roll the gnocchi into ropes
1/2 tsp salt
2 Tbsp dried parsley, crushed with your palms

1) Cook the potatoes in boiling water until soft. May test by using a fork to pierce into the largest potato. If you can easily insert a fork into the center then it is done.
2) Remove potatoes and let them slightly cool before handling and peeling the skin.
3) Use a ricer to get all of the peeled potatoes mashed.
4) Add flour (3/4 cup), salt and parsley. Mix gently until all ingredients are just incorporated. Avoid over-mixing since you want your cooked gnocchi to be soft and light.
5) Scoop a few tablespoons of the dough and gently rolled them on a cutting board until the diameter is about the width of your fingers. May use a little extra flour to help rolling easier.
5) Cut the rope into about 1 inch pieces.
6 Cook the pieces in gently boiling water (may add about 1/2 teaspoon of salt to boiling water if interested) until they float, this will take about 45 seconds to a minute.  Remove the pieces with a slotted spoon and put them on a platter or plate until ready to use.

*The "riced potatoes" are made from using a potato ricer (or ricer) to force the cooked potatoes through small holes. You may use a food mill if you do not have a ricer.
*You may use fresh parsley instead; use however much you prefer.
*Adjust the amount of flour if needed. The less flour you use the better. Start with less flour than you think you will need since you can always add more. I used 3/4 cup for this recipe. If you can get away with less flour then you will have better gnocchi than mine.
*Here are a few gnocchi recipes that I have posted in the past but I used a dough mixer and chilled riced potatoes: Squid Ink Gnocchi and Purple Gnocchi.
*For this batch I experimented with a few gnocchi by forming my rope into a different shape other than round. Honestly it was due to being unsuccessful in rolling the dough out initially so I squeezed the dough to make a long triangular shape. They took time to form but they certainly look very interesting and unique. This gives me an idea to make these style another time but with the correct amount of flour and potato ratio. Sometimes mistakes can be a good thing!


*The photo above taken from my backyard. It was a gloomy foggy day but I thought it looked beautiful and peaceful.
Posted by Thanh at Saturday, March 28, 2015

Email ThisBlogThis!Share to TwitterShare to FacebookShare to Pinterest
Labels: Dumplings