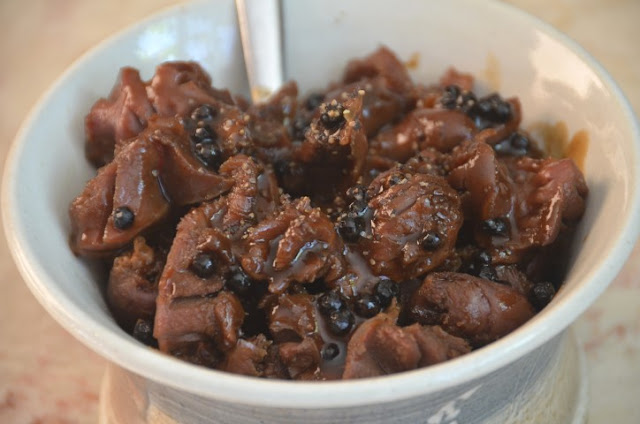 In Vietnam my family usually cooks chicken gizzards, hearts, livers and other organs in soup and serves them in a steamboat on special occasions. Often times the organs are from one or two chickens used for that particular occasion. A steamboat is a metal pot with a divider in the middle of the pot to add hot charcoal. The charcoal will keep the pot hot during the entire meal. Depending on the length of a given meal, typically more hot charcoal is added to the center compartment to keep the pot simmering. My mother, aunts and grandmother still use this old-fashioned style steamboat with the charcoal. Nowadays some people just use an electric pot. I still prefer the classic steamboat because I grew up with them.

My cousin Khiem joked that there is a pecking order when it comes to eating chicken organs or chicken tails in the family! We considered these items to be a delicacy. Khiem tells me when he is sitting down to eat a meal with Ah Ma (grandmother) and his mother, Ah Ma gets to eat them first, then they trickle down to his mother and finally to him!

While shopping recently I came across some chicken organs for sale at my local market. They were very cheap. I guess there is not much of a demand for them around here (Seacoast New Hampshire). I bought a package and it contained a large number of chicken hearts and gizzards. They were quite clean but once I brought them home I cleaned them further using salt and vinegar. I also removed the fatty parts and any of the yellow gizzard lining. Since the gizzards are tough I made multiple partial cuts into them to help speed up the cooking process. I marinaded my cleaned organs with fish sauce, dark soy sauce, sugar, garlic, and ginger for 15 minutes. I used a cup of water but then reduced it down to about 1/4 cup at the end. Instead of water you may use coconut water if you have any. It took nearly an hour of braising in order for the gizzards to be tender. It's strange but while eating this I taste a hint of the Boiled Fertilized Duck Egg! This is a salty dish so eat it with rice or even bread. Perhaps you can make a banh mi (Vietnamese sandwich) with this. Next time you have some organs instead of making gravy or however you normally cook them you may want to try braising them this way. 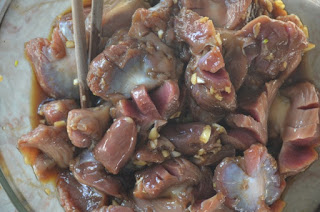 2) Heat a pot over high heat. Add marinaded gizzards and hearts, whole peppercorns and water. Add enough water just to submerge all the organs.
3) Once the liquid starts to boil, turn heat down to a slow simmer, cover the pot. Cook for about 30 minutes or until the gizzards are soft. Scoop out the foam that float to the top and discard.
4) Uncover and turn heat up a little to a simmer for another 15 minutes.
5) Remove the organs. Strain and save the liquid. Wash the pot. Return the organs and strained liquid into the pot. Pick out the peppercorns and put them back into the pot.
6) Cook over high heat for about 10 minutes or until the liquid has reduced (to about 1/4 cup).
7) Remove and sprinkle fresh ground pepper over it before serving.

Email ThisBlogThis!Share to TwitterShare to FacebookShare to Pinterest
Labels: Poultry, Side Dishes: Other