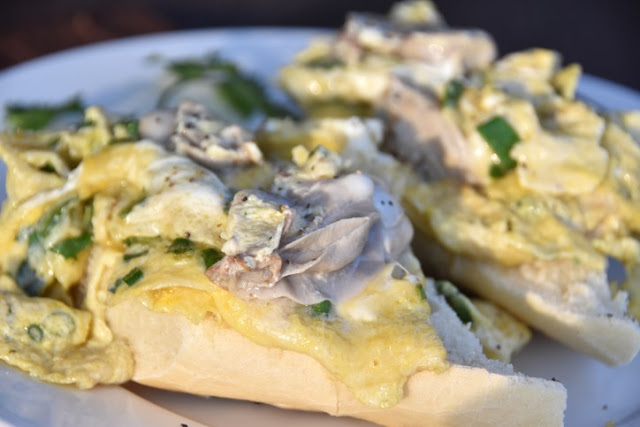 Happy Lunar New Year! May the New Year brings you happiness, good health and tasty food! I think it's pretty nice that I get to celebrate a second New Year. If I mess up my first new year resolution there is always a second chance! :D

Recently my neighbor Marshall made a tasty oyster stew. I don't normally eat cooked oysters but his stew was tasty and fresh. His stew prompted me to make this omelet. I decided that I want to start my new year by making some oyster omelets...ok, semi-scrambled oysters.

Marshall told me where he purchased the freshly shucked oysters. I have been to Al's Seafood in the past but only to buy fish. I called them and was told they do have freshly shucked oysters that came in last night. It's $8.99 for half a pint (price as of February 2016). I can buy whole ones and shuck them but I know that will take me forever. I used 3 jumbo eggs per serving. I use a fork to gently break the egg yolks and mix it slightly with the egg white. I avoid whisking the eggs too much. While cooking I used only chopsticks to move the eggs around in the hot pan. The whole cooking process took less than a minute. The result was light and fluffy eggs with just cooked oysters. I ate this over toasted baguette pieces.

1) Toast the baguette pieces and set aside.
2) In a medium sized bowl add eggs, scallions, cilantro, fish sauce, soy sauce, and sugar. Gently break the egg yolks and slightly mix all ingredients together. Strain and drop the oysters in the bowl.
3) Heat a non-stick pan with oil and butter. Once the  oil is hot pour in the egg mixture over the entire pan. Move the contents around and remove from heat once the eggs and oysters are just cooked. Pour the cooked omelet over the toasted baguettes. Sprinkle pepper over it.

How I Prefer to Eat My Shucked Oysters...

Yes, I do shuck my own oysters once in a great while...especially when I want to lose weight!! I am such a slow shucker that I really believe that I lose calories as I shuck my next oyster! When I go to restaurants I am always amazed by the skilled fast shuckers. You know when you see them. They shuck beautiful and clean oysters for you. This batch below are the ones that I shucked myself. I like to eat all kind of fresh oysters. Most of the time I like them simply with just a squeeze of lime juice. Here I added lime juice and a little kick with a dollop of Sriracha sauce. Instead of ice I put these on re-usable frozen packs; works great! 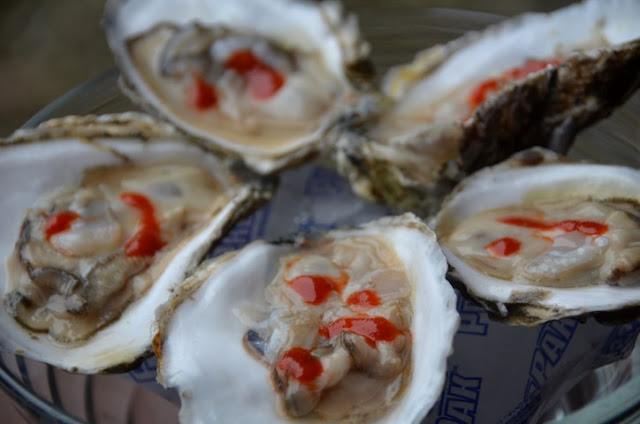